MEDICAL MARIJUANA - IT'S USE IN CHILDHOOD AUTISM

It turns out that some autistic children respond very favorably to cannabis.

The child they loved was gone, due to his medication he became fat and intolerable, a horrible human being.  Then they tried medical marijuana.

Cher Calvin reports on an incredible story about one family's fight for their son Sam. The controversy over Medical Marijuana is nothing new, but new questions are being raised about its use.  One issue in particular, should children take it too.

Cher Calvin: That’s right Mike and Victoria, when you say that it sound so shocking to so many, but California’s Prop 215 the compassionate use act was passed by voters a decade ago and it does allow seriously ill patient with a doctor’s recommendation to use marijuana legally, but what about for children? We did find this one family with a truly remarkable tale.

Cher Calvin: Can you tell what school is like for you Sam?

Cher Calvin: This is Sam, A ten year old who lives with his dad, his mom and his sister Lucy in Northern California. Sam has Autism.

Cher Calvin: From age 2 till 8, Sam’s disorder made him violent and aggressive. His parents, Steve and Angela were truly living a nightmare every day.

Angela: It got to the point where he was hurting other children at school and public places. Sometimes it was when we were staying in line in a store and he would just instantly bolt off and go and hit another child in the face.

Steve: One time he pulled the TV down. He knocked over all the furniture and I had to put him in a hold for maybe an hour. I mean his whole body was spasming. I would just lay there trying to hold him.

Cher Calvin: Sam’s Parents worked with expert doctors who recommended a succession of conventional prescription medications like Risperdal and a host of others. But Sam just gained 20 pounds and became harder to handle.

Risperdal (risperidone) is an antipsychotic medicine. It works by changing the effects of chemicals in the brain. Risperdal is used to treat schizophrenia and symptoms of bipolar disorder (manic depression). Risperdal is also used in autistic children to treat symptoms of irritability.  Heavy Risks for Children, Risperidone, the first drug approved for children with autism and the most widely used, improves some behavior, but can have severe side effects such as sleepiness and weight gain, among many others.

Angela: We were so scared. We were like okay, he’s getting more dangerous. He’s getting bigger and stronger now at least 20 pounds bigger from the risperdal.

Steve: The child that we had grown to love was gone. It was just like when you looked at him or talked to him he had just disappeared.

Cher Calvin: Finally, at their wits end and faced with a very real prospect of needing to institutionalize their son. Sam parents decided to try something unconventional and controversial. Last year, they began treating Sam with medical marijuana.

Angela: When you think about it really is the perfect medication for that kind of behavior. It’s very calming. So this is the medicine right here.

Cher Calvin: Steve and Angela got a recommendation from a medical cannabis doctor. They told Sam’s pediatrician about their plan and Steve grew Sam’s medicine in their backyard.

Steve: We had 6 plants here.

Cher Calvin: This is where Steve took out his tomato plants to grow and to harvest the cannabis. From the marijuana flowers he could make a concentrated form of what people refer to as hash. This ball represents roughly 4 months of doses for Sam. 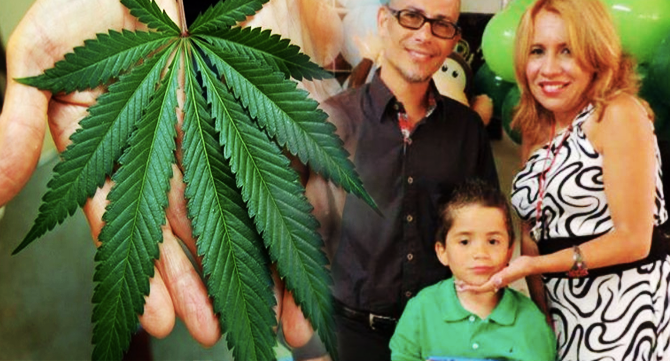 Steve: So I just take out my lighter…

Cher Calvin: Steve softens the cannabis with heat and then takes what appears to be a speck of pot, Sam’s dose for the day.

Cher Calvin: What effect did the medical cannabis have on Sam?

Steve:  Well the first time we did it. We just wanted to do, to see if it would work at all. It was just an amazing experience and I can never forget it. To watch what happened to him it was just like…

Steve: This anguish and this pent up rage and excessiveness it was like it just went away. It was like, it just calmed him down.

Cher Calvin: While we were with the family, we watched Steve put Sam’s daily dose in a piece of melon and take it to him.

Steve: You saw that for us?

Cher Calvin: Within roughly 20 minutes the effects were clear. Where earlier Sam had been animated and angsty, after eating his speck of hash, Sam became calm, relaxed and social.

Cher Calvin: As a mother, how would you feel about people saying to you that you’re getting your son stoned every day?

Angela: At first I was very concerned about that , but recently I’ve been sharing the story with more and more people. Friends and coworkers and I find the more I tell people, the more I share with people, the more I am comfortable with it. It has saved our lives and I think about what it’s done for our son.

Christopher Tolcher: For all the parents out there, whose children may have autism, I think the message here is that this is intriguing information that needs more research before we can confidently say that marijuana is a safe and effective treatment for autism complications.

Cher Calvin: But for this California family medical marijuana has literally been an answer to their prayers and a homecoming for their son.

Steve: It was just a medication that we saw that gave us the results that we were always hoping for.

Angela: And he was happy. I think that really is the key. That he was happy again and he was smiling and laughing.  And we had lost that for so long and it was so sad. We wondered if we were ever to see that again.

Editor's note: While medical doctors recant over and over, that they can't recommend medical marijuana because there is no research, they continue to prescribe dangerous medications, while literally thousands of testimonials can be found readily on the internet.

Steve: It just feels like I have more control now to help my son. Instead of depending on doctors who had the best intentions , but they don’t know what Sam needs. I wanna do what’s best for my son and I’ll do whatever I can for him.

Cher Calvin: Well one important note Sam’s parents wants to tell us is that they have followed the letter of the law regarding his medication and that they grown only the amount of marijuana that Prop 215 allows. The medication is for Sam and for nobody else.

Now Cher does he take this medication every single day?

Cher Calvin: You know they started it off at 7’o clock in the morning, he would take medical marijuana and then take a second dose in the afternoon , but after two years, he started this at 8 and he’s now 10, they sometimes don’t have to give it to him and only give it to him as needed which is incredible. It really has changed his behavior according to them.

Editor's Note:  The parents should have told us what kind of medical marijuana was taken and the dose.  How much CBD is in their son's medicine?  How much THC?  Were there side effects from the THC?  What was the dose?  Did he prefer edibles?

Wow, alright Cher terrific story. Thank you for the reporting.

“If you can’t sit still during speech therapy, you’re attacking the teachers, you’re not going to be able to take advantage of it,” - Christopher McDougall, director - Lurie Center for Autism at MassGeneral Hospital for Children in Boston, who's studied risperidone use in children and adolescents.  Risperidone also has significant drawbacks and limitations. Not all people respond to it, symptoms often return when the drug is discontinued, and it doesn’t improve many of the core behaviors of autism.

How Does Cannabis Consumption Affect Autism?

Martinez is researching the therapeutic possibilities of treating children who have autism with CBD oil, and reports positive results. He recounted one particular case in which a child he treated spoke his first words after receiving a twice-daily spray of hemp oil. After three weeks, the child went from being non-verbal to developing significant language skills.

Marijuana may be a miracle treatment for children with autism

When Noah Shulman came home from school, her mother, Yael, sat her down to eat, then spoon-fed her mashed sweet potatoes — mixed with cannabis oil.  Noa, who has a severe form of autism, started to bite her own arm. “No sweetie,” Yael gently told her 17-year-old daughter. “Here, have another bite of this.”   Noa is part of the first clinical trial in the world to test the benefits of medicinal marijuana for young people with autism, a potential breakthrough that would offer relief for millions of afflicted children — and their anguished parents.  There is anecdotal evidence that marijuana’s main non-psychoactive compound — cannabidiol or CBD — helps children in ways no other medication has. Now this first-of-its-kind scientific study is trying to determine if the link is real.

A novel approach to the treatment of autism

420EVALUATIONSONLINE:  To purchase medical marijuana in California and Nevada, patients require a medical doctor's recommendation.  A 420 evaluation can be completed online in only a few minutes.  With a recommendation, then patients can get either a Cannabis ID (a pocket version of their permit) or a grower's permit.  These documents allows for the purchase of MMJ at dispensaries, cannabis clubs, cooperatives, compassion clubs, and delivery services.