Why suffer when there are Cannabis Based Medicines

" According to the National Institute of Pain, Cannabis has 20 x the antiinflammitory power of Asprin."

A doctor hesitated in prescribing CBD to a patient with an autoimmune disorder, that same patient was taking a gigantic cocktail of pharmaceuticals, including pregnenolone.  The Doc said, CBD works, but we don't know enough about it.  After picking our jaw up off the floor, to tame the ignorance, we set about writing of this article, which references about one hundred research reports - relating to solely to cannabis and inflammation -  from renowned institutes from across the planet. 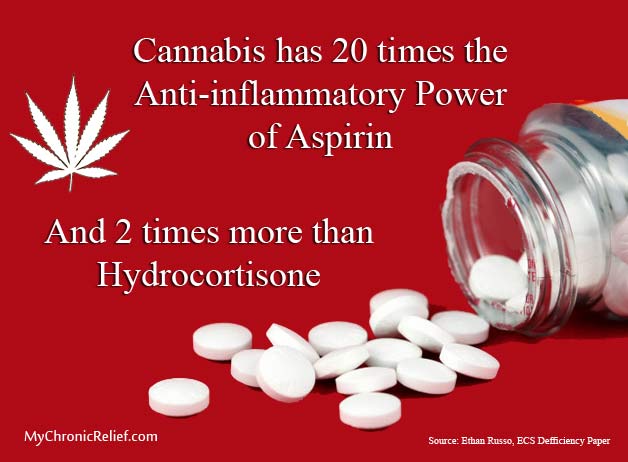 WILL CANNABINOIDS BECOME THE NUMBER ONE ANTI-INFLAMMATORY DRUG?

Cannabinoids are defined medically as a substance that attenuates or moderates the body's cannabinoid receptors.  There are two main cannabinoid receptors that have been studied thus far.  The CB1 receptor is greatly affected by psychoactive d9THC, the main ingredient of most types of American marijuana.

In fact, the discovery of THC itself led to the discovery of the cellular receptor system, hence the name.  The CB1 receptor is predominant in the brain and nervous system while the CB2 receptor is found predominantly in the cells that comprise the immune system.  The cannabinoid CBD interacts powerfully with the CB2 receptor with only a minor effect on the CB1 receptor.  Later it was discovered that both CB1 and CB2 receptors have reside in immune cells, which explains why so many cannabinoids affect and modulates the immune response.

"Most research focuses on the generall efficacy of Cannabis, THC and CBD.  It is virtually certain that an individualized custom mix of with other cannabinoids and terpenes in varying ratios stands to greatly amplify the therapeutic effect in inflammation and other conditions.  This concept is very exciting to both sufferers and researchers of auto-immune diseases alike."

Recently, research studies have demonstrated that suggests THC and other cannabinoids play an important role in the regulation of the immune system. Recent studies demonstrated that the administration of THC in mice triggered apoptosis - cell death in rogue immune T cells and dendritic cells, which resulted in immunosuppression.  Interestingly, the same cannabinoids that suppress immune response also exhibit antimicrobial properties simultaneously.

"Cannabinoid receptor trafficking in immune cells is dynamically regulated by a binary biochemical switch and ingredients in marijuana such as THC and CBD." - Biochemical Pharmacology

In addition, cannabinoids were shown to downregulate infection-signaling chemical production; of both cytokine and chemokine.  The role of the body's own endocannabinoid system is also involved in immunoregulation and erratic delivery or overproduction of the body's endocannabinoids is thought to lie at the core of errant immune response / disease.

The administration of endocannabinoids of enzymes that break down the endocannabinoids, was shown to lead to immunosuppression and recovery from immune-mediated injury.  Manipulation of the endocannabinoid system (agonist and antagonist) using cannabinoids may offer better and safer treatment of inflammatory disorders, due to their especially low toxicity in mammals.

420EVALUATIONSONLINE:  Patients in California and Nevada still require a medical doctor's recommendation to buy either Recreational or Medical Marijuana in California. until at least 2018.  Thanks to the Medical Board of California, 420 Evaluations, Cannabis ID Cards and Grower's permits can be approved over the internet using our Telemedicine compliant process.  Our medical cannabis documents are accepted by clinics, conpassion clubs, cannabis dispensaries, marijuana delivery services and law enforcement in both California and Nevada.  The process is same day, completed 100% online, and takes only ten minutes to complete.  Patients don't have to pay until they're approved to legally buy, possess, transport and use MMJ.  Get Started here.

FURTHER READING - A LOT OF RESEARCH ABOUT WHAT IT DOES

Inflammation & Medical Marijuana  An introduction to Cannabis and Inflammation

A wealth of Testimonials and Research Articles that attest to the Benefits of Cannabis in treating Many Kinds of Inflammation.

The endocannabinoid system: an emerging key player in inflammation

Cannabidiol reduces intestinal inflammation through the control of neuroimmune axis

Diabetic retinopathy: Role of inflammation and potential therapies for anti-inflammation

Vanilloid TRPV1 receptor mediates the antihyperalgesic effect of the non psychoactive cannabinoid, cannabidiol, in a rat model of acute inflammation

Therapy implications of the role of interleukin-2 in cancer. Expert Review of Clinical Immunology, 1-8. Paolo Lissoni. (2016)

Asthma Associated with the Use of Cocaine, Heroin, and Marijuana: A Review of the Evidence. Journal of Asthma, 00. Timothy H. Self, Samarth Shah, Katherine L. March, Christopher W. Sands. (2016)