We can hook you up with Medical Marijuana doctor coupons, deals, vouchers and great low price offers for first time Medical Marijuana evaluations or renewals in Berkeley. 420EvaluationsOnline automated processes with a human touch make it possible for us to offer the most competitive price in the business and provide you with the best 420 deals.

BERKELEY- MARIJUANA IN THE CITY

"When something happens in Berkeley, it spreads." - Tom Bates

Did you Know?  Berkeley is home to the largest Reptile Store in the US? The East Bay Vivarium has:

Small but mighty, Berkeley is perhaps the most influential, liberal and famous little city in the world.  It is a modern Timbuktu, shares the honor as unlikely freewheeling intellectual center, complete with a rich history of hashish and marijuana smoking.

The city is named after an Anglo-Irish philosopher and priest George Berkeley  Most appropriately, he argued against Sir Isaac Newton's concepts of absolute space, time and motion and presented an argument similar to those adopted by Albert Einstein.  Berk is home to the oldest university in the Californian system and has a theological institute that is among the largest in the world.

After the Mexican American War, migrant Americans took over Spanish land, farms and ranches in and around 1850.  In 1885, a private college was looking for a new site and picked Berkeley Hills as their chosen location.  The school intended to sell off the land around the campus and plotted the street grid that is the foundation of today's street plan.  However, the lands were saved to consumer consumption, as the State collaborated with the college to birth the public University of California.

The university was built simultaneous to the constructed of saloons, housing and industries flocking to the wharf area called "Ocean View"  By the 1870's the railroad terminal for the transcontinental railroad terminus was installed in Berkeley.  The locals were strongly in favor of prohibition at the time.  At the turn of the last century, residents voted to make the city an alcohol free zone.

In 1878, the City was incorporated.  The first elected officials claimed to belong to the Workingman's party.  With the establishment of the university, these fundamental values continue to be a mainstay in the culture.  Berkeley was a little hick town up until 1906.  The great San Francisco earthquake changed everything.  Thousands of refugees from across the bay swamped the area.  This invasion of humanity included painters, sculptors and learned that would synergise with the university to produce one of the finest art scenes west of Chicago, some would say.

Berkeley grew up until the depression of 1929 but survived thanks to the economic spin off from the university.  Berkeley sprung to life with World War II and the Manhattan project  Berkeley's intellectuals would play an important role in humanity's efforts to blow itself to hell.  Uranium isotope isolation, cyclotrons, discovery of new elements come courtesy of the military industrial complex and Berkeley intellectuals.

Berkeley would become a focal point for the so called radical left, dropouts, hippies who rallied against the Vietnam War, free speech, and the warped American way.  With the end of the Vietnam War, the full on "leftist" radicalism toned way down, but the undercurrents of the "good old days" remains until today.

In an Oxymoron, the city of the people now has some of the most expensive prices for houses in America or even the world.

The City of Berkeley produces little more than intellectual property.  There is almost no self sustaining industry' manufacturing, agriculture, commodities, nothing.

The university and associated laboratories account for 80% of the "primary" jobs in the city.

HISTORY IN A NUTSHELL - WHY CAN'T THE ENTIRE STATE FOLLOW THESE WINNING POLICIES? - The California Cannabis Countdown: The City of Berkeley - 2016

Cannabis collectives in Berkeley consist of a group of patients and primary caregivers whose purpose is to provide for the cultivation and distribution of medical cannabis to their members. The city allows cannabis collectives to be organized as any statutory business entity in California as long as they are operated in a not-for-profit manner. Though collectives are allowed only in residential districts, dispensaries are authorized to operate at a non-residential location and may cultivate, acquire, bake, store, process, test, and transport medical cannabis as well as provide other incidental services to their members.

The council’s approval of the dispensary - met largely with cheers by a sympathetic public attendance - was followed by a recommendation from Councilmember Kriss Worthington to the planning commission to consider raising the city’s ceiling for cannabis dispensaries from four to six.

“The urgency of getting these approved is in the interest of public safety — to take cannabis out of the streets and sidewalks and to put it into a licensed, regulated environment.”  - Councilmember

What will likely be the first medical cannabis dispensary to be owned by a senior African-American woman, as well as the first to cater specifically to the needs of seniors, has received approval to open in Berkeley, Calif.

“As a physician who has conducted NIH sponsored research, I can’t stress enough how critical this legislation is to the scientific community. Our drug policy was never intended to act as an impediment to conducting legitimate medical research. We need empirical scientific evidence to clearly determine whether marijuana has medicinal benefits and, if so, how it would be used most effectively. This legislation is crucial to that effort, because it removes the unnecessary administrative barriers that deter qualified researchers from rigorously studying medical marijuana.” 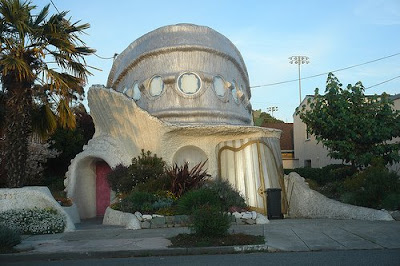 The creator of this abode must have been smoking some really good shit to have come up with this concept.

In Berkeley there is a 2000 square foot house built in 1990 that is shaped like a fish. The Berkeley Fish House was designed after the Tardigrade, perhaps the most indestructible living animal,. A Tardigrade is a small, water-born animal with eight legs. They are only a fraction of an inch long but, are able to survive extreme environmental conditions. i.e.  plus or minus 300 Fahrenheit  You can boil them, radiate them with 1000x more than the lethal dose for most animals and they will survive, no problem.  They can even withstand a vacuum which means they can survive in outer space for a while.  Insane.

Back to the house, this strange pad has four bedrooms over two stories.  The structure is built primarily from Rasta Block (styrofoam and cement block)  It is advertised as indestructible, more or less, with it's termite proof, fire proof, earthquake proof, everything proof.  The superior insulation makes it soundproof up toe 50 db and temperatures are cool in summer and warm in winter.

Every house should be built like this one, right?  That is, if you want to survive tough times, which will come along, sooner or later.

"Longtime Berkeley community members familiar with Amoeba's rich history as part of the local cultural fabric, consider BC3 to be the most qualified candidate of the five applicants."

Experienced and seasoned attorney, Robert Raich took both of the landmark cases on medical cannabis law to the Supreme Court and is a renowned expert on medical cannabis law.  His cases have been featured in a variety of media outlets including CNN, NBC, New York Times, Washington Post, Fox News, USA Today, and more.

The Monroe Firm provides aggressive and innovative representation of civil and criminal matters in both State and Federal Court. Our firm handles a vast array of cases ranging from Criminal MMJ & DUIs to Civil Rights lawsuits.

A medical marijuana dispensary operator has sued the city of Berkeley and three other dispensaries in federal and state court, alleging the defendants created an illegal monopoly that shut out competitors and drove up costs for patients.

Chris Smith, principal in Forty Acres Medical Marijuana Growers Collective, also accuses the defendants of racketeering, in asking the court to put an end to the city's "flagrantly unlawful actions to establish and enable the unlawful monopolization of the sale of medical marijuana in Berkeley by a few individuals operating in blatant violation of California law."

Guess Where Seniors Might Be Getting a Specialized Pot Dispensary, 2015

An ordained minister and one-time Catholic-school principal hopes to provide an unusual new service for the senior citizens of Berkeley, California: a cannabis dispensary exclusively for them.

"As one of the first municipalities to recognize the benefits of medical marijuana, the City of Berkeley served as an early test case for collectives and cooperatives seeking to dispense medical marijuana to qualified patients. Presently, the Berkeley Medical Marijuana Commission is considering finalists for the fourth dispensary to be authorized to operate within Berkeley city limits."

Comment:  Do  American citizens, whatever their creed or color, really need to spend their hard earned money on lawyers, cops, judges and correctional personnel's time busting people for 1 ounce of weed or whatever in Berkeley - of all places?  It happens.  Would you personally shell out the $20,000 that the above case costs the public  - just to bring it to trial? And if the prosecution wins, it's going to cost YOU another 50-100k per year to house to convict.  If you like either peace, freedom or cash the answer you know exactly what stand to take..